To the Boat Cruise

December 02, 2019
Hi lovelies,
What a wonderful sight to end our lovely day.After a lazy sleep in this morning, we headed off for breakfast and then back to our room to pack all Robbies souvenirs.

We booked out of our lovely room and decided that as it was only 2km, that we would walk to where we were to board the Evergreen Emerald Dawn for the next leg of our adventure.The walk was quite pleasant, and we saw some more of this amazing city.


We were taken aboard our ship, and taken to our cabin. It is just amazing.Our room currently overlooks the Hungary Parliament Building. It was pretty in the day time, but as you can see it is spectacular at night. Just like a fairy tale.


We unpacked and the headed to the lounge where they were offering a light lunch. It was then back to the cabin for a quick nap to recharge for the evening's festivities.


Our evening began with an orientation talk, followed by a 4 course meal in the ship restaurant. They seat the all passengers at once, and it appears to run like clockwork. The meal was lovely. 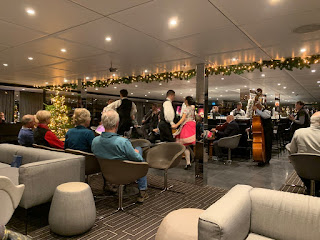 The evening was finished with a concert by a local musical group and some dancers. They were really good and a lot of fun to watch.More fun laughing with Robbie who was roped into getting up and doing the hanky and hat dance.

A lovely start to our cruise.All for now. Stay safe and keep enjoying life.Love us.

Popular posts from this blog

Yesterday afternoon Robbie and I went off to visit some friends.

Robbie had made plans to go fishing with Robert, while I planned to spend some time with his beautiful wife Nelsa.  Lucky her name is not Liz or we would all be really confused. 😁


The boys set off to Cooby Dam and for Robbie it was his first time fishing from a boat on a dam.  Robert was extemely kind and supplied all the gear, as well as some excellent tuition.


We received a text from them not too long after they left saying that Robbie had caught his first fish, just 5 minutes after they launched the boat.  I think our excitement would have been on a par with theirs.  We were nearly jumping up and down with happiness that they had caught something.


They apparently had a wonderful time, with both men catching a few yellowbellies each.


Robert also caught an eel tailed catfish, which was something new for both of them.


It was after dark when they returned home, both very satisfied with the expedition, and pl…
1 comment
Read more

Well our cruise finally came to an end yesterday. It was a blast and we both had a great time over the 2 weeks. Too many highlights to mention but we did enjoy the smaller towns we visited on the river.

We did a couple of things yesterday before we disembarked today. We had a canal boat cruise through the narrow canals here. Did you know 1/3 of the Netherlands is water?
They have at least 3 unusual things here. 1 - More bikes than people. Bikes have more rights than people!! They have special lanes all through the city as car spaces are very few and expensive to own or park. Around $8-12 AUD a hour to park. Most people have 2 bikes, 1 a each end of the journey so you ride to the train or whatever then you leave that bike there go to work etc and pick up your other bike at the other end. Rain hail or shine they ride bikes and are crazy like Parisians in their cars!! You have to watch out for bike more than cars!!
2. A lot of house are leaning as the subsoil is very wet and the…
Post a Comment
Read more